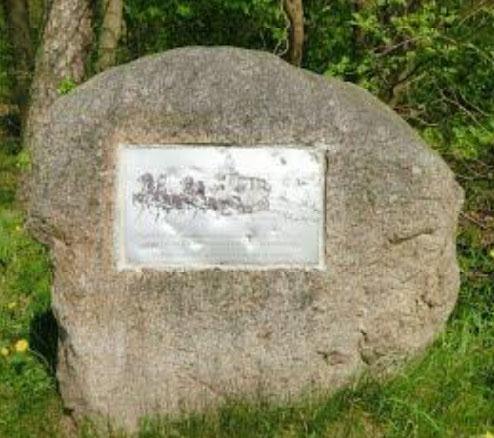 Rietze, in the district of Edemissen, along the River Erse, which we are following past Abbeille, is a small hamlet, with an excellent social centre, a reference point for hikers/pilgrims. It lays precisely on the route of Abbot Albert, as shows an image carved on a bolder, a monument placed in the local garden. We resume our walk toward Braunschweig, the first great city on our route; we are still on a plain and following ancient routes now more densely dotted with settlements and busy crossroads. We leave the village from the south on the Alte Heerstrasse or K13 which in 1,2 km leads us to crossing the L320. We move to the right for 100 m and take the Ersestrasse, but we leave 250 m on, shifting to the left to avoid the traffic, resuming our position past the busy locality on the cycling lane parallel to Wipshausen.  We continue in the same direction on the Ersestrasse, which turns into Kirchstrasse, for 3,5 km walking first among then skirting a series of ponds up to the K69 or Dorfstrasse, which we cross and continue on the K65 which in 2,2 km takes us to Harvesse. Our route gets closer to the great city, becoming rather monotonous but remains safe for the walker due to the presence of cycling lanes and pavements. In a short time we cross the Motorway 2. Having overcome the highway we are approaching Wendeburg which we traverse with the Braunchweigstrasse; we continue on the L475 and arrive on a great navigable canal, which we cross continuing straight towards Bortfeld; leaving the town we take to the left on the Glinderweg which we follow through the fields and woodland to the outskirts of Lehndorf; we walk along the Bundesallee or L638, then the Saarstrasse; over the Motorway 1, to the Hildesheimerstrasse, then Rudolfstrasse, Celler Strasse, Lange Strasse and we find ourselves in Braunschweig.