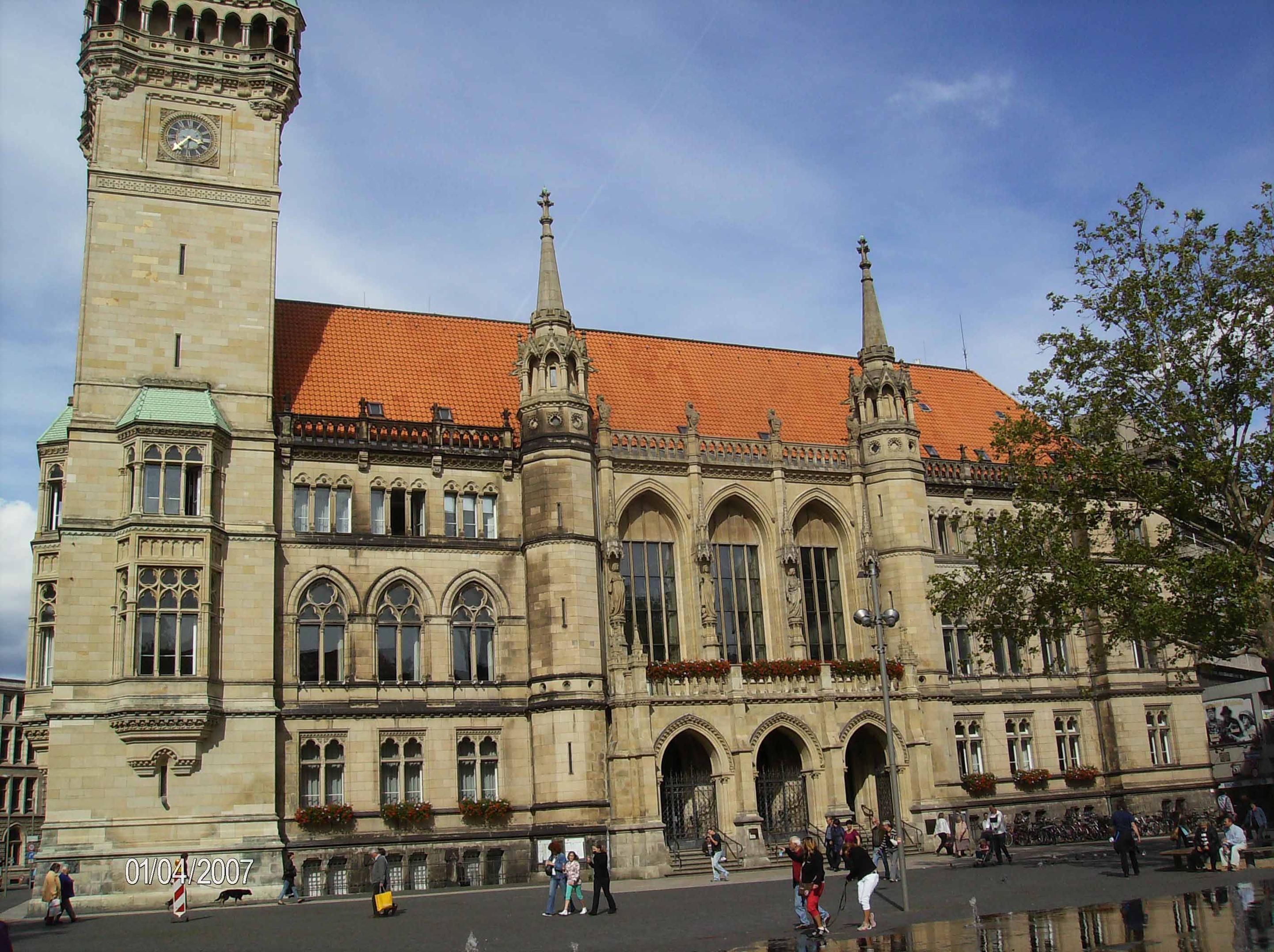 Thursday 17° / 6 ° CFriday 13° / 5 ° CSaturday 15° / 8 ° C
strong>Braunschweig (in lower German: Brunswiek; in Italian and in English it is also called Brunswick) it is an extra district city of about 250.000 inhabitants situated in Lower Saxony. It is the second largest in the region after Hannover. It lies north of the Harz range, on the river Oker, a navigable river that issues into the North Sea via the rivers Aller and Weser.
Monuments and places of interest
La Burgplatz (castle square), surrounded by historical buildings of great cultural interest: the Cathedral of St. Blasius built at the end of the 12th century, the Burg Dankwarderode, a 19th century reconstruction of an ancient castle, the Neo-Gothic Town Hall, the 19th century reconstruction of an ancient castle between 1893 and 1900, and some half-timbered houses, such as the Gildehaus, today the seat of the Craftsmen Association. In the centre of the square there is a copy of the “Brunswick Lion” a Romanesque statue of bronze cast in 1166. The original being preserved in the Burg Dankwarderode Museum. Today the lion has become the symbol of the city, the Altstadtmarkt (the old city market), around which are the Old City’s Town Hall, built between the 13th and 14th c. in the Gothic style, the Martinikirche (Church of St. Martin, of 1195), and important historical buildings, among them the Gewandhaus (ancient headquarter of the Cloth Merchants Guild, built before 1268), and the Stechinelli-Haus (built in 1690), and a fountain of 1408. The most important museum is the Herzog Anton Ulrich Museum, a well known museum, the oldest public museum in Germany, founded in 1754. The collection consists of Western art masterpieces, among them Durer, GIorgione, Cranach, Holbein, Vandyck, Vermarer, Rubens and Rembrant. Within this stage the will also go through Wolfenbuttel, a city of 53,954 inhabitants, chief town of a rural neighbourhood (Landkreis) by the same name. Wolfenbuttel deserves a particular visit for its history and culture. Bearing in minds that here, in the Herzog August Bibliothek, are preserved the Annales of Abbot Albert, where we find the details of our pilgrimage from Rome to Stade. Things to see: the Castle, the Herzog August Library, the Lessinghaus, the Smaller Castle, Branschweigisches Landesmuseum, the church of San Brictius, the Marienkirche. After an attentive long visit to Braunschweig for its monuments and its history, we may resume our southward walk, toward ROMA. Leaving from the city centre, the Burgplatz, we cross the Domplatz, we then take the Munzstrasse, we cross the Waisenhausdamm and continue on the Leopoldstrasse; we cross the Konrad-Adenauer Strasse and take the Nimes Strasse; after 150 m we turn right and cross the river Oker. We now follow the river course through a beautiful park for a distance of over 1 km, walking the Werkstrattenweg and the Eisenbutteler strasse, up to the railway line which we cross and continue to walk on the river bank, we underpass road 39, we skirt the docks and continue along a fascinating river environment for over 4 km and we arrive on the Leiferdestrasse, we turn left and 250 m on, turn right on the road that takes us over road 395 and in 2 km we will be in Wolfenbuttel.
We enter Wolfenbuttel walking 2 km of Alter weg, which we leave by turning to the right end entering road 79 Neuer weg; we now cross the Gruner Platz, and straight ahead we cross the river Oker, we overcome the roundabout, 150 m on we will be at a crossroad and take the second road to the right Lange Herzogstrasse, which in 450 m takes us to the centre. Having visited the city, we resume our walk on the Reichsstrasse and we will be back on the Oker, which we cross to get onto the Marktstrasse. We now turn right on the Lindener Strasse, then Neindorfer Strasse or K620 and we will regain the open countryside. 4 km on and we shall be in Neidorf. Leaving Neidorf, we turn right, still on the K620, avoiding the K32, then left. 1,6 km on, we are on the edge of Kissenbruck. Reached the end of the straight road, we turn left on the L513 which we follow for 200 m before turning right, then left and follow the woodland, then through the field and across the railway and we will be on the bank of the Oker, which we shall follow for 1 km, arrived at the bridge we take the K27 on the left and back across the railway for 1,6 km to arrive at Bornum. We walk through the village to get to the K620, but soon we leave it to turn right on the Sundernweg, after 260 m we turn left on the Windimuhlenweg, we walk for 360 m  then turn right on a field lane which takes us straight to Borssun, in 1,5 km. We enter the village and walk the Backhausweg, we turn right on the L512, which we leave after  500 m to turn left on the Kleine Dorfstrasse, which we follow for 200 m then turn to the left on the Graube, which will take us into open countryside. A straight route taking with the crossing of various canals, to reach the Muhlen Ilse, where we turn left and in 2,2 km we shall be in Hornburg; we enter the town on the right on the Braunschweigerstrasse, then we cross the park on the left for its entire length, up to the L550, which we cross to enter the historical town centre.