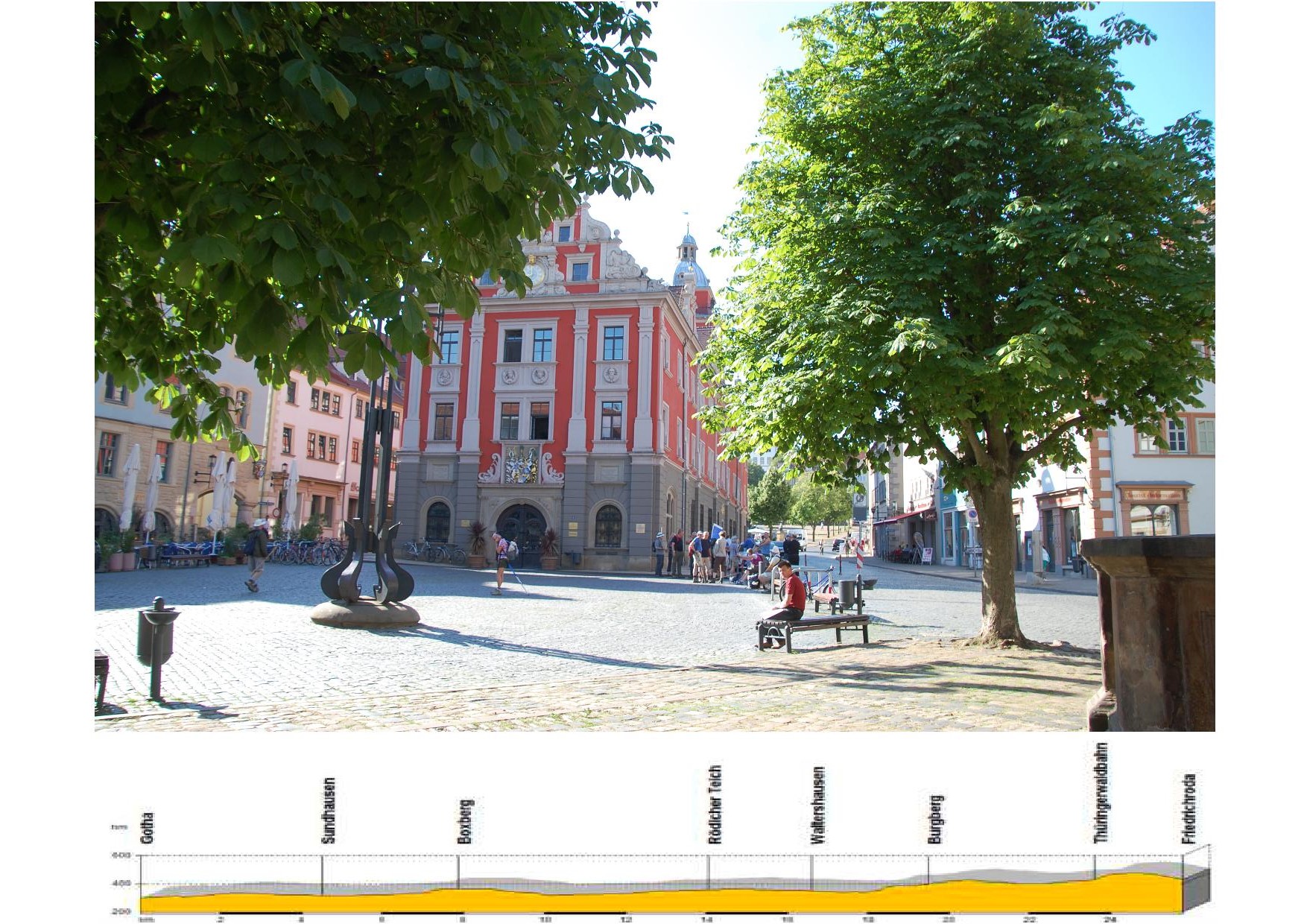 Wednesday 26° / 15 ° CThursday 25° / 16 ° CFriday 27° / 19 ° C
Gotha is a small city of 45.736 inhabitants, is the chief town and the largest urban centre of the rural district of Gotha. In the past it was the capital of the Duchy of Saxony-Coburg-Gotha, and then it was replaced by Coburg. It is in this city that for the first time the Gotha Almanac was published in 1764.
The Friedenstein Castle with its fine English Garden must be visited.
With this stage we reach the edge of the Turingian Forest, the second mountainous area on our route after the Harz. Here we leave the plain and will walk through a hilly, forested landscape, but these are gentle hills rising from 300 m of altitude and culminating with 400 m.
We leave behind Gotha by walking all the length of the Municipal square, up to the Castle, which we skirt from its right along the Lindenauallee, after which we turn right on the Puschkinallee; we turn left on the Uelleber Strasse which takes us over the railway to get to the second road on the right, the Friedrich Ebert Strasse and we are out of the city. We continue for 800 m, we cross L 2146, continuing along the Siedelofstrasse, we pass through the last suburb of Gotha, Sundhausen, walking the Hauptstrasse; keeping the same direction we take the Am Stockborn and walk on for 1,6 km, we cross the railway, a further 1200 m and cross again the railway line. We proceed straight on for 1,4 km and arrive at the motorway 4, which we underpass with great attention to the chaos of motorways highways and railway. Coming out of the tunnel we take to the right and then turn left to go on the K14 or Hauptstrasse with which we cross Leina along the river of the same name. We go on the same road until we cross the L1026, and on for a further 1 km and the field lane on the right and leave it to take a field lane on the right: 2,5 km across the fields up to the L1025. We cross this road and go on straight, and uphill through a beautiful wood; we now descend down to the plain of Fredrichroda by walking along the Bahnhofstrasse; continue along the Friedrichplatz and turn right on the Marktstrasse and we are in there town centre, in front of the church of St. Blase.