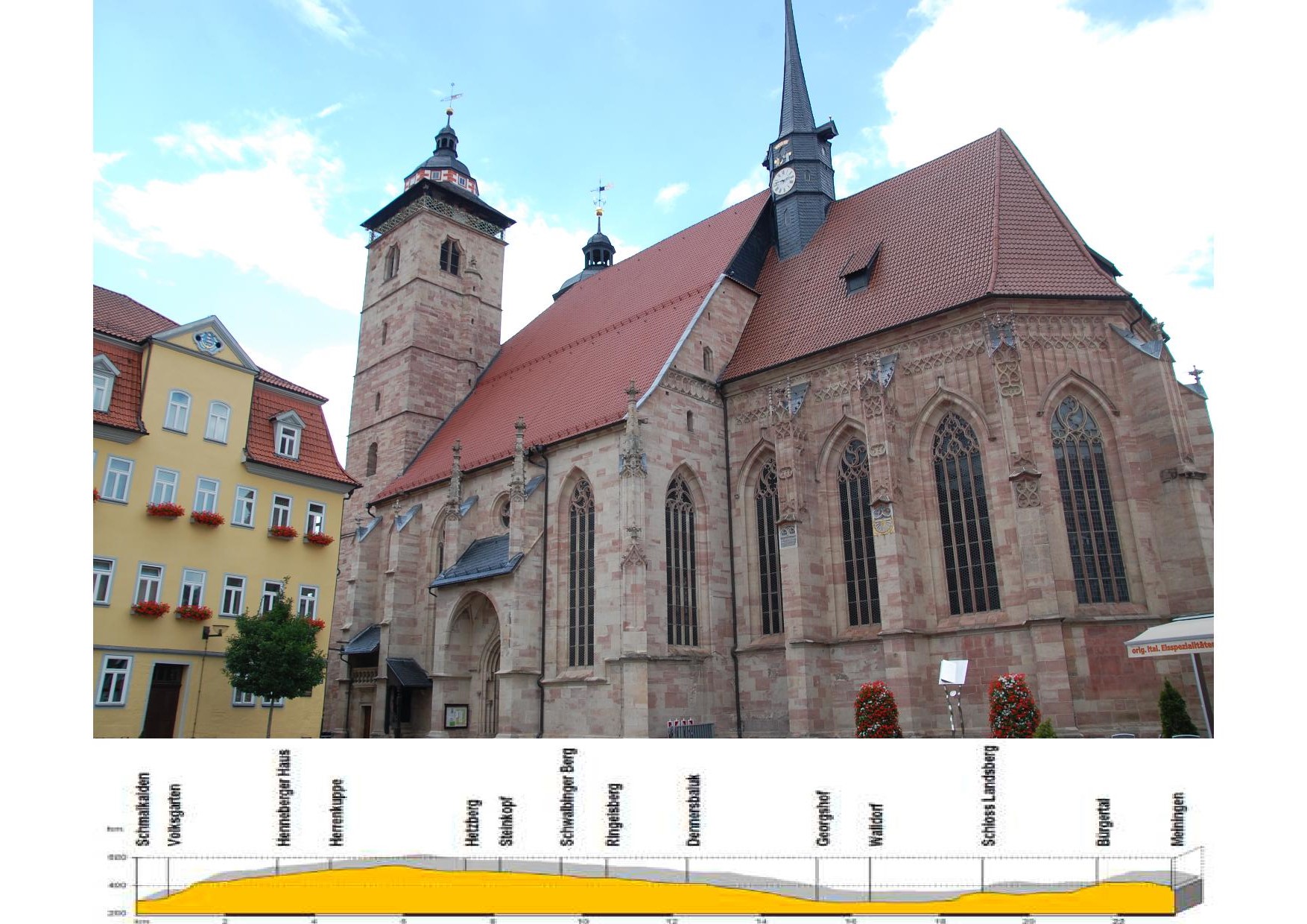 Thursday 6° / 4 ° CFriday 3° / 2 ° CSaturday 8° / 7 ° C
Schmalkalden – the name of the town is officially registered for the first time in 874 A.D. with the name of Smalacalda (or Little river). It was declared a city in 1227 and twenty years later it became the fief of the Henebergs, and remained their property until 1583 when it became part of the dominion of Assia. The city is known in history for having been the seat of the Constitution of the league of the protestant princes against Emperor Charles V (from which came the League of Schmalkalda) in the troubled times of the reformist struggle. The walls of the city are still well preserved, along with homes of the 16th-17th century. And there is the Castle of Wilhelmsburg which contains the local museum.
In the course of this stage we leave the valley of the Schmalkalde River to arrive in the valley of the Werra, walking over the hills which separate the two valleys with an altitude of no more than 550 m.
We depart from the centre of Scmalkalden and turn right on the Auger Gasse, we turn left on the Haindorfsgasse, then sharp to the right on the Bahnhofstrasse which we leave after 150 m to turn left on the Sandgasse; at the end of the road, having crossed the railway, we turn left again on the Siechenrasse. At a three-road junction which we encounter after 170 m, we carry on straight ahead on the Welgerstal which we follow for 2,5 km up the hill between two depressions, and which climbs gradually from 300 m to 450 m of altitude to meet the Notstrasse. We follow this road and pass a first crossroad from the left and continue uphill and pass a second crossroad from the left that takes to Grumbach; at the third crossing, again from the left we follow the footpath on the right; we continue and ignore a road coming from the left; as do all footpaths coming from right and left which we encounter, and begin to go gradually downhill along this bendy route in the middle of a woodland until we meet the Kaiserweg. 800 m still on a gentle downhill slope we turn sharp to the left on the Honerweg which we follow for 4,4 km, in its running along a ridge in a thick wood up to the point where it descends in the valley of the Wallach River on our left where the village of the same name also is. We continue now having reached the bottom of this valley, for 3 km in the middle of fields and meadows, until we reach road 19 or Meininger Strasse, then the railway which we cross turning right on the Bahnhoferstrasse, We cross the Werra River, and reach the outskirts of Walldorf which we skirt on the left taking, at the first crossroad, the Fritz Assmuss Strasse again to the left the Scheergasse; we continue for 1,3 km and come up to a factory which we skirt on the left and after 400 m we turn to the right of the hill of the Landsberg Castle. We are now nearing our goal: continuing on the footpath which first turns left, then right, we cross the river, we walk along a stretch of railway, then turn right and we reach the crossroad with the Bodenweg; we turn left and arrive on the Leipziger Strasse, we continue on the Bernardstrasse, turn right and see find ourselves on the Schlossplatz of Meiningen.