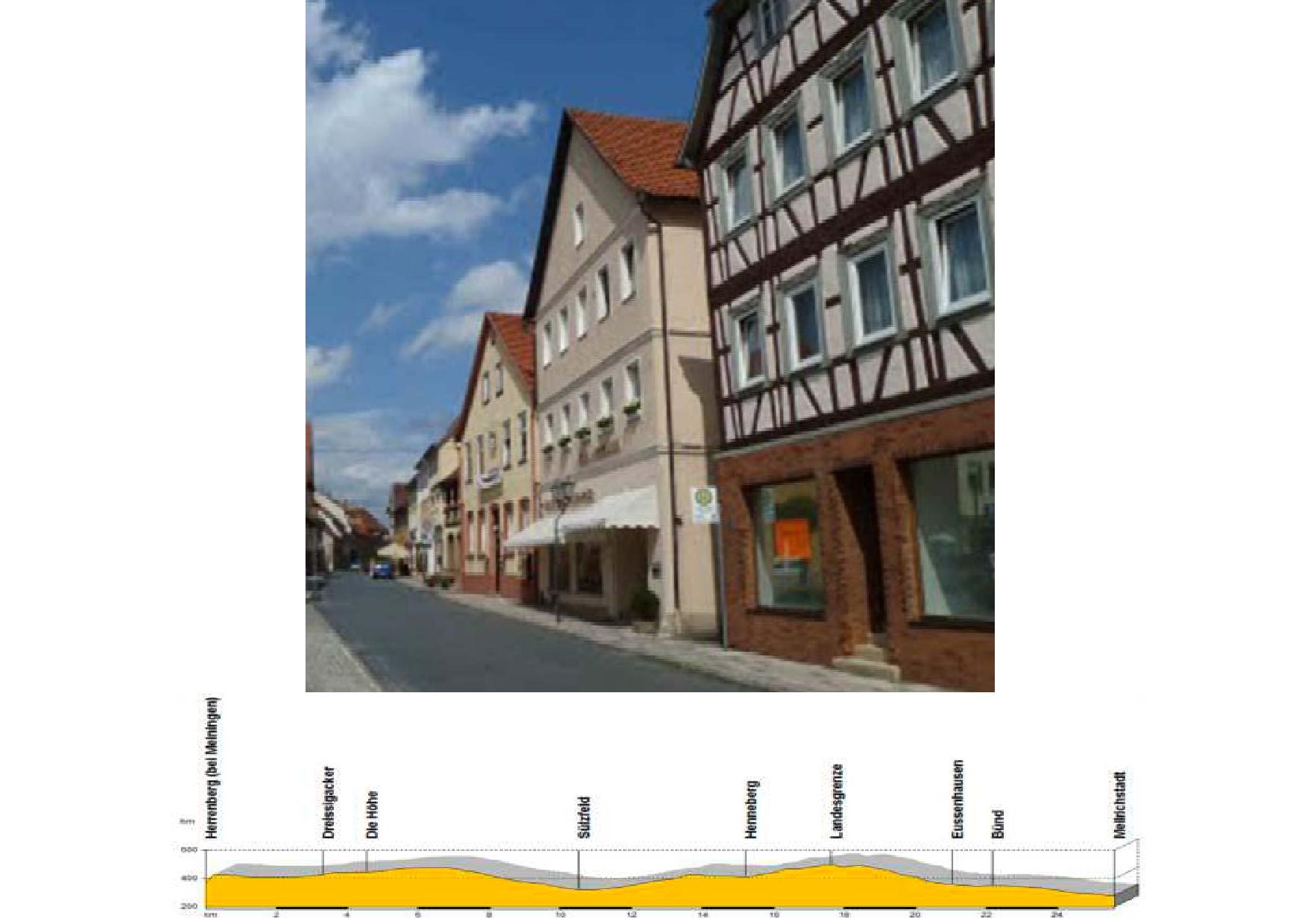 Tuesday 8° / 4 ° CWednesday 5° / -0 ° CThursday 6° / 6 ° C
Mellrichstadt is a borough of 6.040 inhabitants, situated within the Lander of Bavaria.
The Battle of Mellrichstadt took place on the 7th of August 1078 in Grafenberg at the foothills of the Ron massif. It was the field battle in the war between the Emperor and along the valley the king of Germany Henry IV and the Anti-King Rudolph of Sweden.
This stage is not long or difficult. Between here and Bad Neustadt we will be walking along the valley of the River Streu, following the undulations of the landscape, until the country becomes more varied, but still with no difficulties. We depart from Marktplatz and take the Hauptstrasse which we follow even when it turns right and crosses two roads from the right and one from the left; at the second crossroad from the left we turn left, bypass the water purification plant, we underpass the railway and turn left on the lane that will take us out of town. We will bypass the water purification plant underpass the railway, and on the left we will be on the Bruckenstrasse which turning right will take us to Oberstreu, a small village with 1600 inhabitants; 350 m on and we turn left on the Stiegel which will lead us to the open countryside; we again cross the River Streu, turn right and continue on the Steinweg which in 1,1 km will take us to the margins of Mittelstreu, another small village. On the crossroad of the Bahrastrasse, we continue straight on along the Loheweg which we leave to turn left and sharp to the right on a path in the middle of the fields along a hedge, then in a wood which we follow for 1,3 km; once out of the wood, where are a few houses; we will enter the Am Strendelsberg, which we will follow for a few metres on the right which we leave turning left. We cross a field, then a road, leaving a village Unsleben on the right; continuing on the Zum Felsenkeller for 2,5 km, following the River Streu on our right, we will arrive at Heustreu , the last village before our end of stage. We enter the village along the Wiesenmuhlweg, carry on along the Torstrtasse, after 250 m we turn left, on the Talstrasse We take the second lane on the right and go toward the Chapel of St. Michael, in the midst of a beautiful park. Out of the park, we turn right on the Friedhofsweg, continuing on the Alte Strasse, we cross the Buhlstrasse, we walk along the Buhlgasse, turn left on the Wetterstrasse; we shall be very careful when crossing the bypass and continue straight along the path along the road until we cross over the River Frankische Saale; we turn right to the edge of the wood, surpass the water purification plant and continue on the right on a footpath that in 1,5 km will take us to underpass the 279; 700 m more through the fields and we reach the outskirts of Herschfeld, one of the quarters of Bad Neustadt, on the left of the confluence of the Streu with the Saale. We may not enter the town, in which case may turn right and then left on the Erlenweg, again right then left, 300 m more and we will be on the NES3 which we will follow on the right for 200 m crossing the river Saale and turn left, we then underpass the railway and turn left. We pass by a clinic and carry on walking across fields for 700 m more; we turn right and underpass the railway again, then in the station square we turn left and cross the River Brend, we underpass the Meiningerstrasse or St2445, turn left then right on the Am Holberg, then on the left on the Sporleinstrasse: 200 m and turning right we shall be in the Marktplatz, the historic centre of Bad Neustadt. We may now call it the day.
N.B. immediately after the subway of the railway, if we turn left and cross the river Saale and re cross the railway back there will be a fine footpath 400 m long through beautiful meadows we can reach the tow’s Spa and we may now climb up to the Castle of Salzburg.