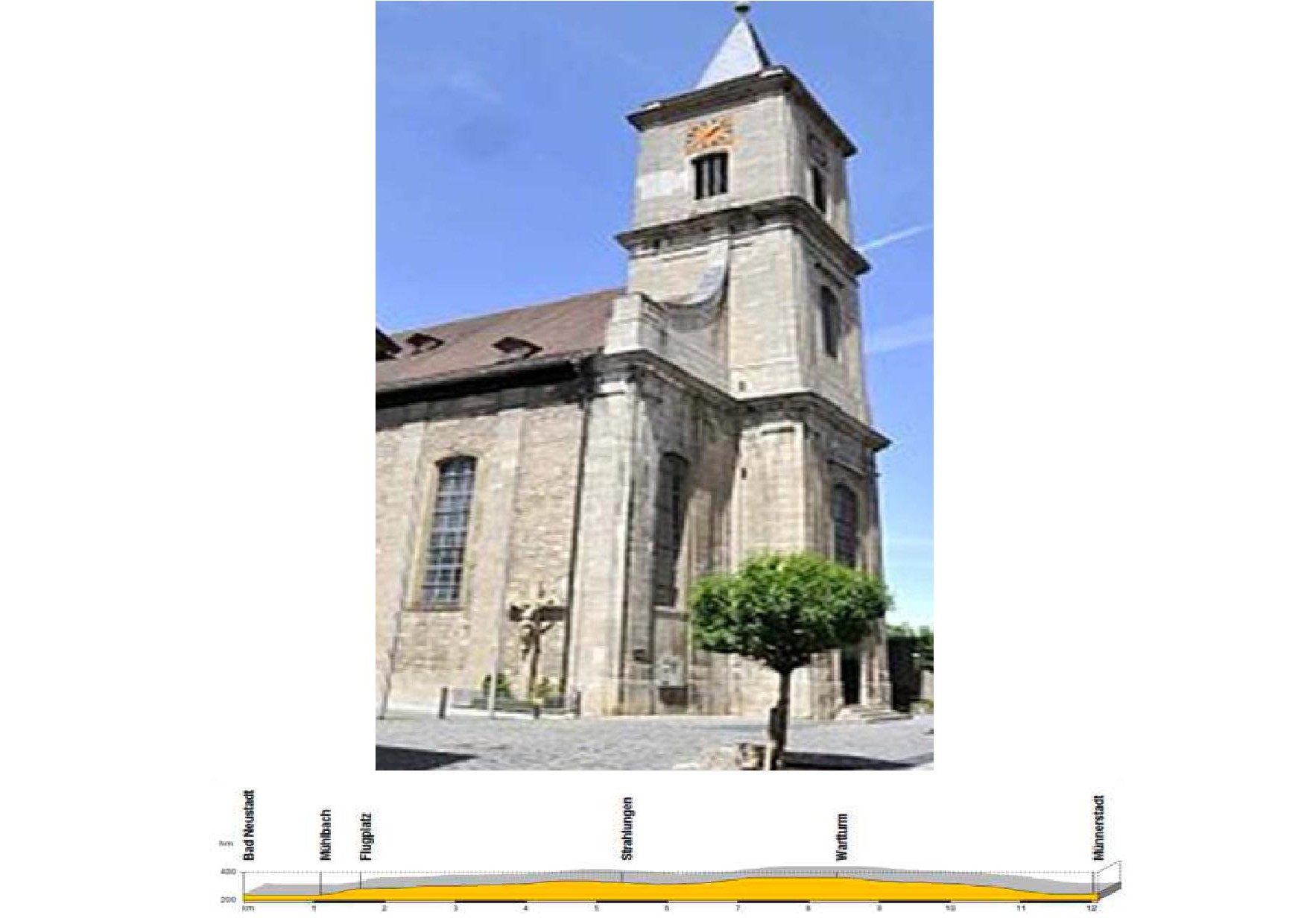 Bad Neustadt an der Saale (officially Bad Neustadt a.d.Saale) is a town of 15.935 inhabitants. It is crossed by the Saale of Franconia, a tributary of the Main. In 790 Charlemagne founded the Palatinate of Salz in the territory of Bad Neustadt. Neustadt has been named Civitas Nova in a document by the Bishop of Wuerzburg in 1232. The medieval city walls of Bad Neustadt has its plan shaped as a heart and according to a romantic legend: the city was founded By Charlemagne as a present to his wife.

This is a short stage, but with a higher altitude than the last stages described: maximum elevation at 7°km: 368 m.a.s.l. We leave from Marktplatz and, heading southwest, we turn right on Hohnstrasse, at the second road, the Salzpforte, we turn left, we take the causeway lane, surpassing the St2445 and continue in parallel to the Muhlbascherstrasse, we cross the river Frankische Saale and arrive at the satellite city of Muhlbach. At the first crossroad we go left and having crossed the railway line, we turn right and continue on the Lohriether strasse; at the first crossroads we turn right and then left on the Grasberg which we follow in its turning to the right and carry on for 400 m, when we pass the road leading to the airport, we turn sharp to the left and follow the footpath along the edge of the airfield for 800 m; we come to a road and turn left, we pass the first and second crossroad from the left, turn left at the crossroad on the right: 750 m across the fields, all uphill, and turn right, 500 m and we turn left and enter the wood, after 500 m we return to the fields which we cross and enter into Strahlungen, walking on the Karlsbergstrasse, which we leave at the junction of four roads to turn right on the Sonnenstrasse, at the end of which we see the church. We turn left on the Neustadter strasse which we leave after just over 100 m to turn right on the Platz strasse and continue on the Krumme gasse; we now arrive on the Munnerstadterstrasse and turn right still following this road when it turns left. We continue for 500 m across the fields, then we leave the road, turn left, 500 m more and we reach the highest point of this stage: 368 m a love sea level. At this point we turn right: 1.350 m in the fields and we arrive at road 287, we underpass it, 200 m and are on the Strahlungerweg which we leave after 500 m to turn first left and then sharp right: 300 m skirting a tract of beautiful woodland. We then turn right along a path which in 800 m will take us to the outskirts of Munnerstadt: we have descended down to 240 m above sea level. We enter into Leo-Weismanterstrasse which we leave soon to turn right on the Ludwig-Derleth strasse, and enter on the Zentstrasse; turning left, paying enough attention to the tangle of roads which cross with the 287: we cross the River Lauer and continue along the Meiningerstrassel then Riemenschneiderstrasse and we are in the centre of Munnerstadt.