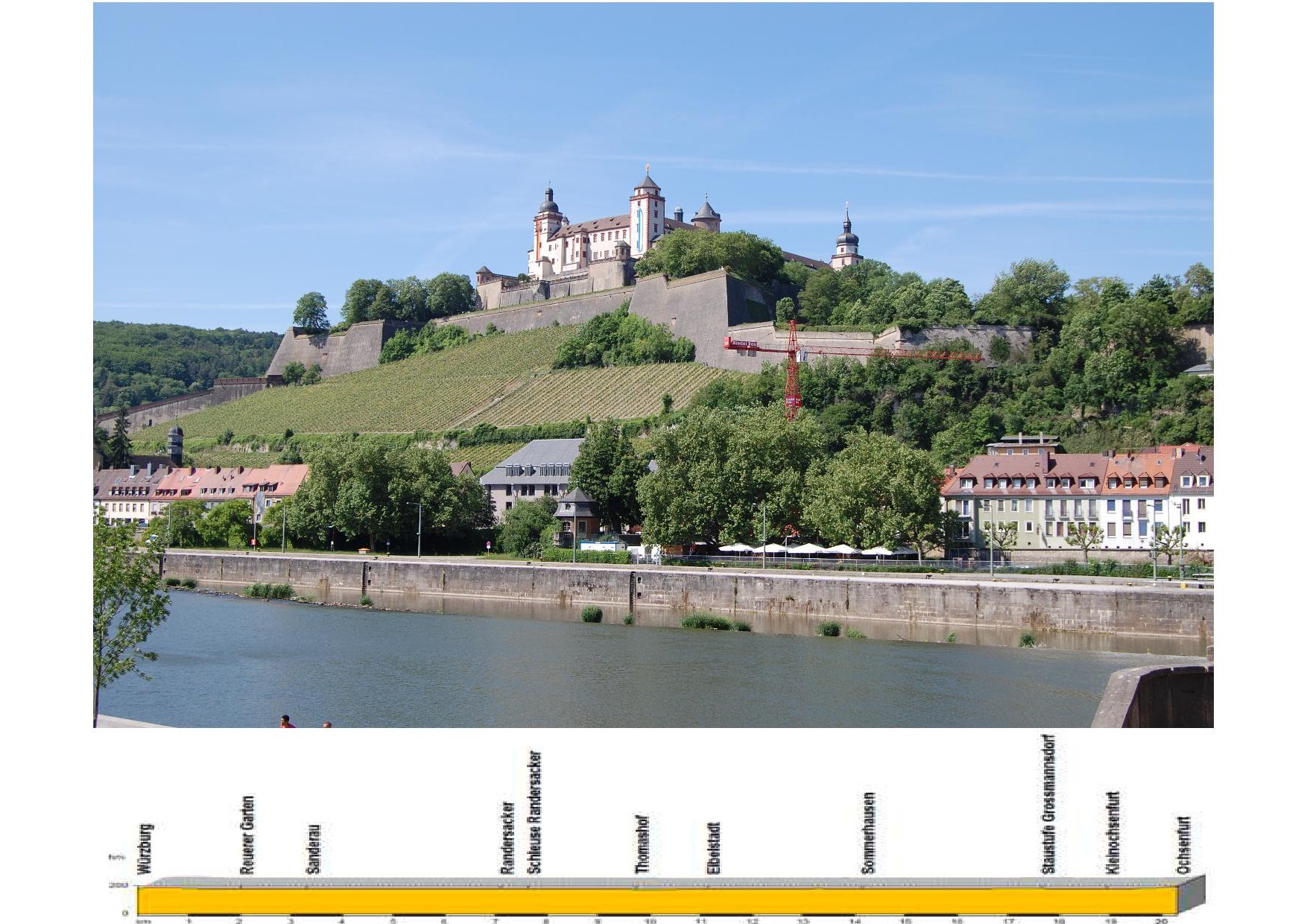 Würzburg is a city of Lower Franconia , In the Western part of the Lander of Bavaria; it is situated at an altitude of 182 m a.s.l. on the right bank of the Middle River Main, a tributary of the Rhine on its left bank. Around the year 1000 A.D. where the Fortress of Marienberg now lies, there was a Celtic fort. The Celtic community was then converted to Christianity in 689 and a Diocese was founded by St Boniface (Wynfrith) in 742 who appointed St Burkhardt the first Bishop of Würzburg. The Cathedral was built over the period 1040 – 1225 in the Romanesque style. Thanks to Friedrick Barbarossa, who had celebrated his wedding with Beatrix of Burgundy there in 1168, this became an independent Duchy governed by the Bishop and remained so until 1806. Würzburg reached its golden age in the period between 1650 and 1750, under the government of Bishops Princes of the Schonborg family. In 1720 the foundations of the Residence of Wurzburg were laid. This is the terminal city of the most famous tourist’s itinerary in Germany, the Romantische Strasse, 341 km long, which starts at Fussen, a town of the Bavartian Alps, and which runs through Augsburg, Rothenburg-ob-Der- Tauber, and other localities of the so-called Bavarian Swabia.
This is a stage that may be rightly called “fluvial”, it runs long the right bank of the River Main for all its 20 km, which separates us from Ochsenfurt we shall walk along the right bank of the Main, without any gradient, in an environment dominated by the river, its greenery, industries, agriculture in a continuous flow. The city deserves a thorough exploration for its monuments, its castle, and its river. We resume our walk leaving from the Municipal building directed to the bridge on the Main; we then turn left and start walking along its bank, which we will follow the whole way, with only a few temporary digressions. 700 m and we underpass the Ludwig bridge, 2 km more along a cycling lane, and pass under the 19 then underpass the railway. 500 m and we distance ourselves from the river for a while, we walk through a parkland, where we have a surprise on our left, beyond the motorway 13: a great vineyard on the slope of the bank, sometimes very steep, this will be a type of landscape that will accompany us at intervals up to Ochsenfurt; we arrive at Randersacker, the first small municipality on our route. We overcome one of the many weirs on the Main, then 1,8 km and underpass the 3, 1,6 km more and we shall be at Eibelstadt, another small municipality. Then we come to Sommerhausen, after 2,8 km we walk between the river and the motorway 13, still on the cycling lave. Now we have less than 6 km to the end of this stage: Ochesenfurt. We arrive in the quarter of Kleinochsenfurt, by the ancient stone bridge of the Via Romea, which we cross and go straight ahead to the town centre