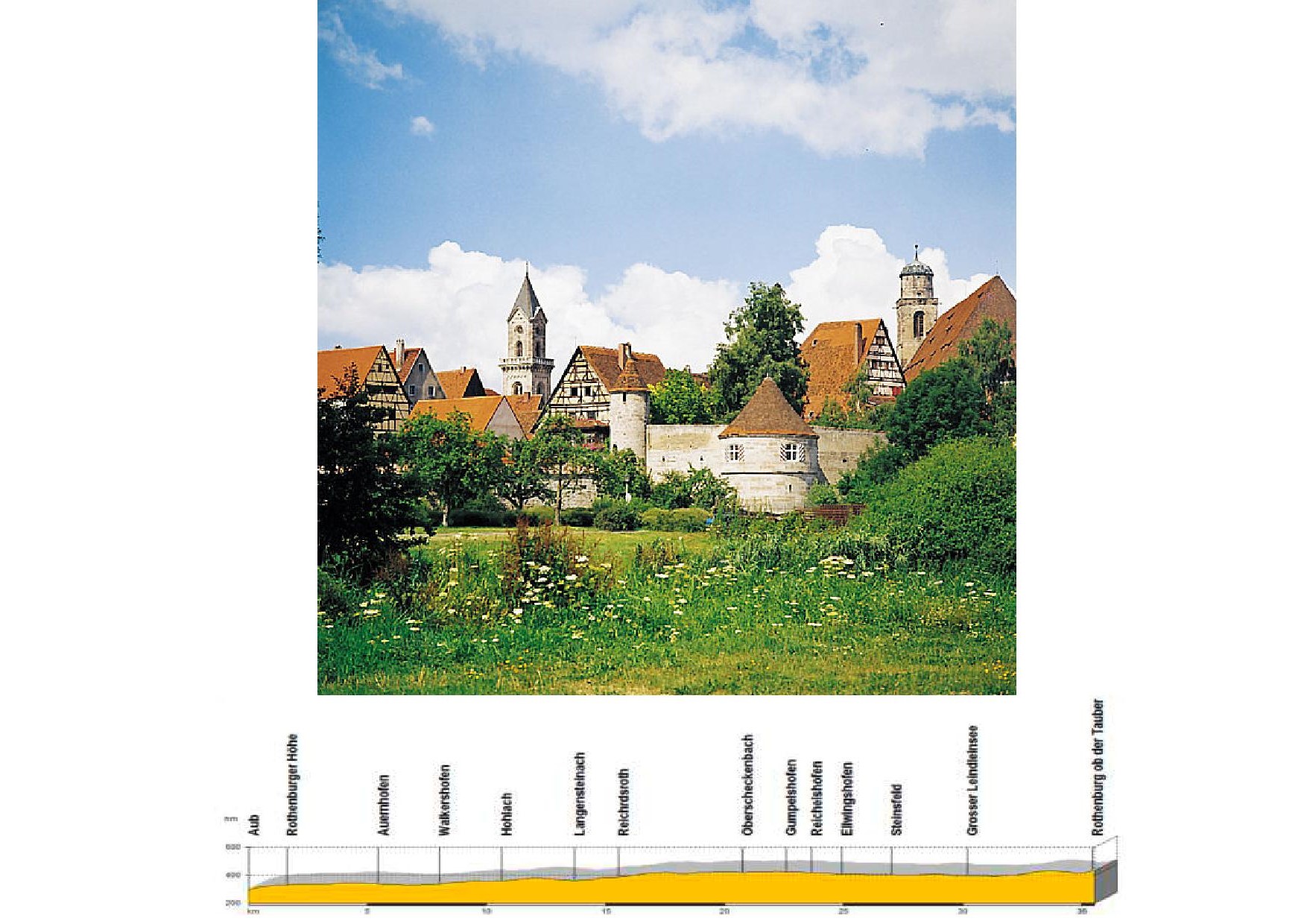 About this stage too, it is not the gradient that worries us, but rather the length; here we have the choice of two possible routes; both across agricultural land through rolling landscape with long straight roads, changes of direction and several towns and small villages: it twill be advisable to bring enough water and snacks with you. For nature lovers the route in orange colour (or N°2 in the outdoor map) may result more attractive, especially in the second part where it follows the river Tauber: we here describe the most historically relevant of the two: the one in blue.
We say farewell to Aub, a small municipality of 500 habitants, and resume our walk from the Marktplatz turning right on the Etzelstrasse, at the second crossroad the two routes divide: we decide to walk the Uffenheimerstrasse, and at the crossroad on the Rothenburgerstrasse with which we enter the cultivated countryside which we shall cross for an extent of over 30 km. The other route turns right on the Waldmannshofer Strasse. Past 2,3 km through the fields, which with several changes of direction, we arrive at the level of Waldmannshofer which we leave on our right, whereas the second route takes the direction of Waldmannshofen. We continue in the direction of Hauernhofen which we reach after 3 km after having crossed the St2256 and the NEA47. We carry on across cultivated land directed towards Walkershofen, then Honlach, and in little less than 8 km we shall arrive at Longensteinach, another small village. We leave walking along the NEA451 on the right, then we turn left and return across then we turn left and return to seemingly endless cornfields, passing by Gumpelshofen. Meanwhile those who have decided to walk the alternative route will have reached Tauberzell, on the River Tauber which will be followed up to the end of stage. We cross the village north to south, and turn right at the exit, to avoid the St2419, and with a rather tortuous route through the fields we arrive at Ellwingshofen, where we turn left, we cross the St2419 and we approach Steinsfeld walking along the torrent Fischbach which we cross after 1,1 km, we cross the village, keeping the direction of the torrent and resume our walk through cornfields. We walk for 2,8 km, almost on a straight line and arrive at the Grosser Lindleinsee, the water reservoir, a tributary of the Tauber, the river of Rothenburg. Skirting the Kleiner Lindleinsee, we continue for 800 m along some woodland and turn left; a straight road will take us to the outskirts of Rothenburg in 1,3 km. We enter the town through the Gattenhoferweg, we turn right on the Paul Finkler Strasse; at the roundabout we turn left and sharp right on the Heckenackerstrasse which in less than 1 km joins the Mergentheimerstrasse, and rejoins the alternative route; now the two routes overlap and take us to the North Gate, and to the Klingentorbastei, then the Klingengasse and to the city centre.