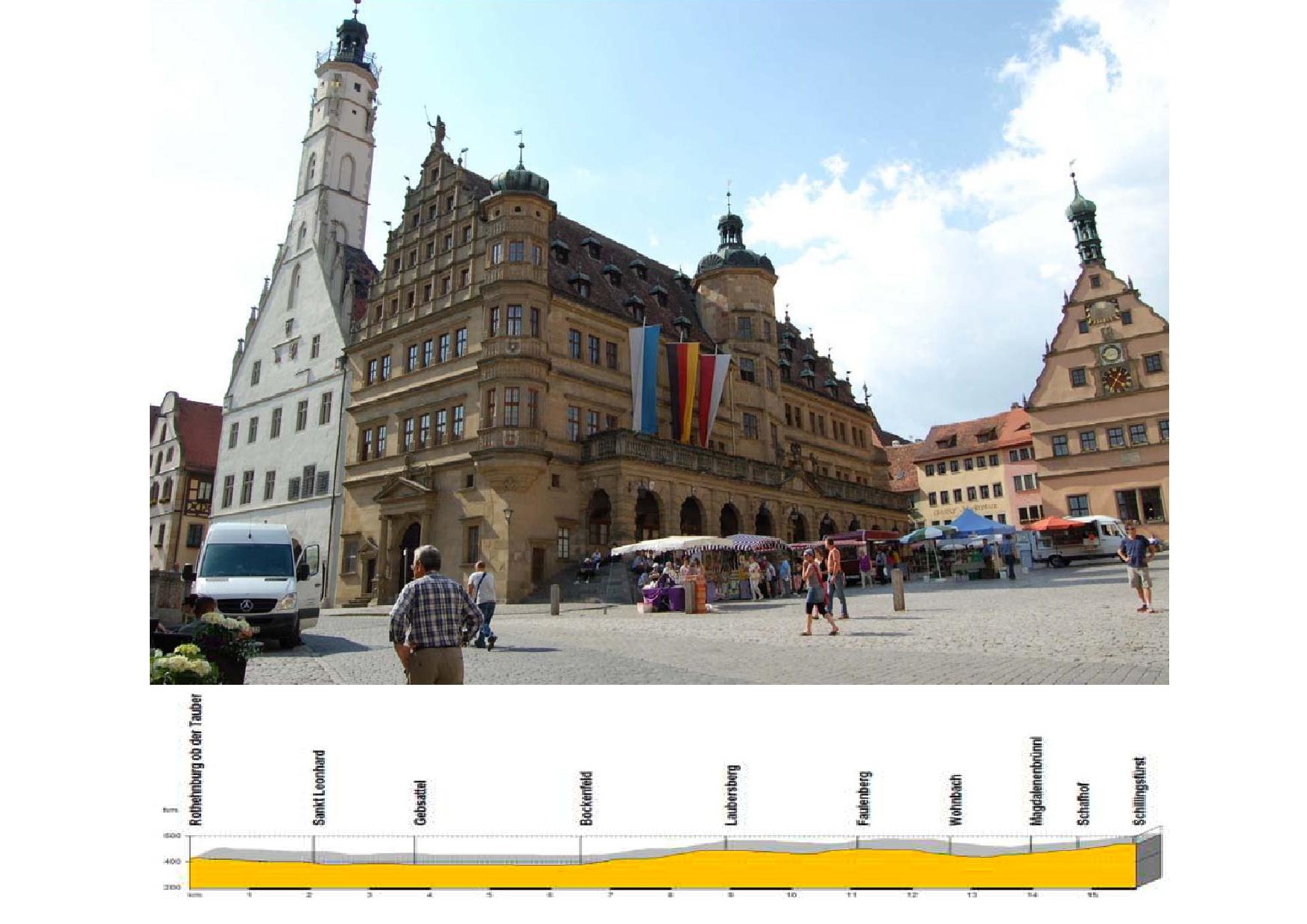 Wednesday 25° / 15 ° CThursday 25° / 18 ° CFriday 30° / 20 ° C
Rothenburg ob der Tauber is a town rising at 425 m above sea level, with around 12.000 inhabitants, on height with a commanding view over the River Tauber. The town retains much of its medieval architecture and defence walls in good conditions.
The historical town of Rothenburg boasted a fortress which stood where the garden of the Count Comburg-Rothenburg dating back to 950 is today. Around 1070 the Counts of Comburg-Rothenburg built the castle of Rothenburg on summit of the hill, today known as Essingkrug (vinegar jug), surrounded by the river Tauter. Around 1170 around the Stauffenburg, the city of Rothenburg was also erected. The city consisted of a market square and there Church of St James. The historical centre that stands on top of the hill is surrounded by walls which are walkable for the guard. They are provided with towers, ramparts and gates such as the Roeder Tor, which protected by ramparts and by two low towers, and surmounted by a lofty tower, then by the Wurzburger Tor and the Klingen Tor surmounted itself by a tower which in its turn is surmounted by sports. Before this gate is the Wolfgangzkapelle, a church built in 1475. One more gate is the Burgtor, fortified by a tower and surmounted itself by a loftier tower, the tallest of all; a powerful watch tower is found on top of the gate called Kobolzeller Tor of the XIII century. In the Burggarten, a grade set on a rocky spur above the river Tauber we find the sole remain of the Imperial keep Blasiuskapelle with a square plan and dated to the XII-XIII century. The view on the valley of the river Taube, with the Topplerschlosschen, a giant tower of the 1388, with a bridge on the Tauber, originally built n the XIV century, later rebuilt, and the sanctuary, hewn out of the rock in 1472-79 called Kobolzellerkirche. This stage is characterized by a gradient, u uniform for the first 7 km, with some engaging uphill. In the second part, we cross a varied landscape, going from urban to rural areas and from hills to mountains. We skirt a small village; we walk across three more small villages. We leave from the Markpletz and move southward way, we take the Obere Schmiedgasse, continue on the Untere Schmiedgasse, at the crossroad we continue on the Plonlein, then the Spitalgasse, we arrive at the ramparts which we cross as we cross the road and the small car park in front of us, then take the cycling and pedestrians lane flanking the St2419, or Nordingen strasse. We follow this for 1,5 km, when coming to a great bend on the right we takes to the left, after 300 m again left and we are out of the town, we cross the fields and after 800 m we arrive at Gebsattel, a small municipality in the outskirts of Rothenburg. We do not enter the village but turn right and carry on along the edges of the village. We overcome the crossroad with the Kirchdorfstrasse, then the torrent Wethbach and keep the same direction for 2,2 km, until arriving at Bockenfeld, the first small village on our route. After the first houses, at the crossroads, we turn left, then right, and continue up to the AN33, which we follow on the right for 100 m before turning left. We begin to climb, at first gently up to crossing the Motorway 7, then entering the wood, when the hill begins to feel hard and we have 1 km more of it, then there is a break, a brief downhill respite, but soon we climb again, up to reaching 525 m above sea level, near Faulenberg. Now our route, with continuous ups and downs keeps the same altitude. We cross more woodland and descend on Wohnbach, where we climb trough other stretch of woodland, till we arrive at 516 m in the outskirts of Schillingsfurst and at 540 m above sea level, and we have arrived, at Schillingsfurst.