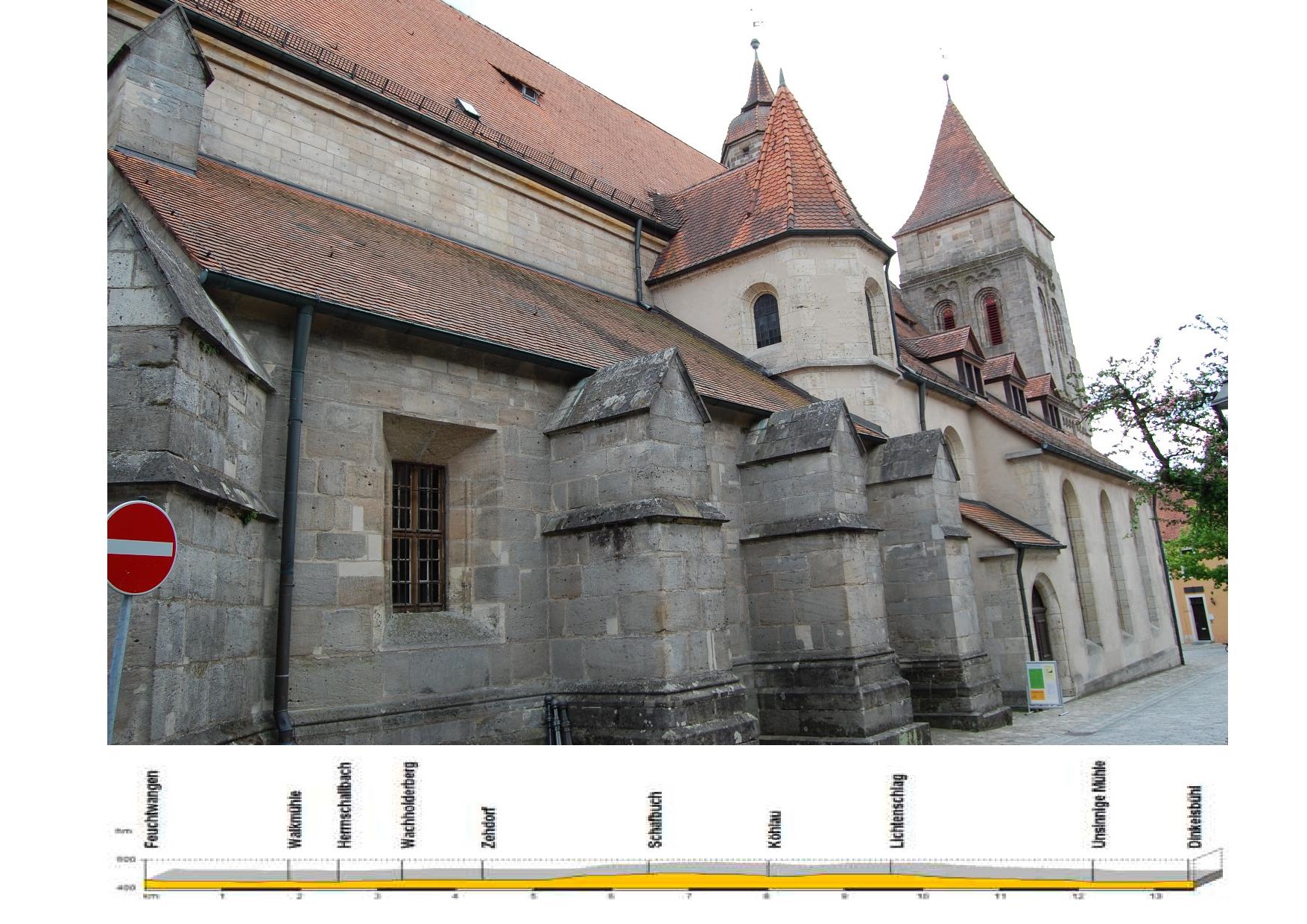 Feuchtwangen is a municipality of 12.254 inhabitants. From 1241 to 1376 was a free Imperial city, of the Holy Roman Empire. The end of it Imperial connotation was caused by the cession of the city to the Burgraviate of Nuremberg. It is a typical town of the Romantic Way, mentioned for the first time in 818/819 when it was the seat of a Benedictine Monastery. The heart of the town is the Marktplatz, the Market Square, with the former Town Hall which today has turned into the Tourists Office. Interesting things to see are a series of bourgeois houses and half-timbered houses, in the typical Franconia style. Franconia is a region of Northern Bavaria. In the centre of town stands the Röhrenbrunnen, the fountain with a statue of Minerva, protectress of trade for Feuchtwangen, various crests and the fir tree, the symbol of the town. From the square we arrive at the Kreuzgang, the beautiful Romanesque 12th century cloister, now used as a theatre in Summer, and the craftsmen ateliers (Handwerkerstuben). From the cloister our visit continues to the Stiftskirche, the ancient collegiate church, built in the Romanesque style by the Benedictines, then adapted to the Gothic taste by the Canons around 1200. Next is the Johanniskirche, the ex parish church. Both adapted to the Lutheran cult in 1533. Of the ancient City Walls and of the three city gates only the Oberes Tor survives, the rest have been demolished during the 19th century. Among the museums, we recommend the Fränkisches Museum (Museun of Franconia), one of the most interesting folk art museums in Southern Germany.

We resume our walk from the Marktplatz and precisely from the fountain; we go left on the Untere Torstrasse, which we leave after 200 m to turn again left onto the Ringstrasse; at the roundabout, up to the last houses of the town. We pass by the water purification plant and carry on to Hermschallbach, the first village we find in the middle of the countryside: our route in the stage varies from a first agricultural area to a second area, which is mostly wood land to return later to a second agricultural area near the outskirts of Dinkelsbuhl. Continuing our walk for 1,4 km we arrive at Zehdorf; 800 m and we leave the fields to enter the forest: a pleasant immersion into greenery for 2,5 km, partly uphill, up to the AN42, which we cross and continue, still in a forested area which we cross and continue, still in a forest, for 500 m more, up to the road which turning right, will take us to a hamlet where we turn left. Now we are crossing a field, then return into a forest for 400 m. again we cross a field for 250 m and turn right on a dirt track to arrive to Hellenbach; we walk out of the village turning right and left after the last building we take the road that in 1,5 km leads onto the 25: on our left the road takes us to the DCC Campingpark Romantische strasse; we cross and turn right, we skirt the pond, turning left and follow the road that takes us onto the St2218, which we follow walking on the cycling lane for 200 m, then we turn left to arrive on the Larrieder Strasse: we are now in the outskirts of Dinkelsbuhl; we continue on the Dr. Martin Luther Strasse, we arrive on the Weinmarkt and here is the town centre.