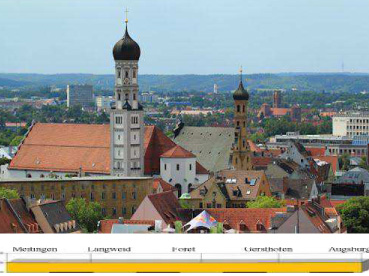 Meitingen is a market town within the district of Augsburg, on the left bank of the river Lech. Meitingen is mentioned for the first time in a document of 1231.

This stage presents no difficulties, if not the difficulties of a densely urbanized area. We have a choice of two routes, you may choose according to your cultural inclinations. If one chooses the orange route, one must expect to walk mainly on cycling lanes, first along a canal, and then along the river Lech, in this case one will quickly arrive at Augsburg (19 km); if instead one prefers to walk through urban areas one must follow the blue route or the outdoor active route, in this case one must often change from road to lane to avoid an excess of traffic. However, this only means walking 4 km more.

We will start from the Church of St Wolfgang in Meitingen, then those who choose the environmental route, take the direction of the canal of the River Lech, with the ST-Wolgang-Strasse, 200 m then turning right they will reach the Gartenstrasse where they torn left, then right and again left on the Schleifweg which in less than 1 km will take them to the bank of the canal and after 1,5 km will cross it and will continue to walk between the canal and the river Lech all the way to Augsburg where they rejoin those who chosen the blue route. Those who have chosen the alternative urbanized area will have started along the Hauptstrasse which will have taken them into open country, then at Herbertshofen, have crossed the village North to South on the Klemensstrasse and to cross the A29. Beyond the A29, they have turned right, following the direction of this road for 750 m to reach the canal, on the left bank, opposite chosen by those of the orange route, ahead for 1,3 km, turning right and continue to follow the A29. They crossed the 2 and arrived at Langweid am Lech. They cross the town and arrive on the Meitimger Strasse and turn on the Augsburger Strasse. They have bypassed the road junction and continued by following the 2, and entered woodland where they have followed the Donauworther Strasse; on exiting the wood they arrived at Stettenhofen, then, continuing in the same direction, they returned to open country. They bypassed a second road junction, walking along the fence of a large military outpost Crossing the 2 on the left, they took to the right the Ludvig-Hermann Strasse, which they left for 1 km to turn right again on the Berliner Strasse and, after 400 m, on the left they found the Via Claudia, then the Klosterweg and arrived at Gersthofen. Crossing the entire town from North to South keeping the same direction along the la Donauworter Strasse first, and then the Augsburgerstrasse; crossing the motorway n.8, returned to open country for a short distance and at the roundabout turned left and took the Schonbachstrasse which turning right and following for 1,5 km then turning left on the Ahornerstrasse, then went right on the Aussere-Uferstrasse and returned on the canal of the river Lech; 600 m and they were on the Dieselstrasse, rejoining the orange route. Having the two routes rejoined, we now cross the canal, take the Riedingerstrasse, and one after the other, the Sebastianstrasse, the Georg-Haindl Strasse, the Mullerstrasse, the Unterer Graben, the Muller Graben, after which turning right on the Barfusserstrasse, on the left on the Stengasse and we have arrived in the centre of Augsburg (AUGUSTA), the Roman city.