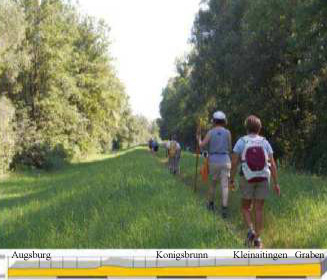 Augusta (in German Augsburg, (For the Romans Augusta Vindelicorum), founded in 15 B.C. during the rule of Augustus, is situated on the banks of the River Lech. Its source is located in the Austrian Vorarlberg, where the river rises from Lake Formarinsee at an altitude of 1,870 metres and releases its waters into the Danube, 40 km north of the city. The oldest part of the city is now the southern quarters of the city, on the edge of a plateau situated between the steep hills of Friedberg East and the hilly area West of the city. Once visited the city, we resume our walk to Rome. Here we have a choice: to follow cycling lanes which follow the Romantische Strasse, or, once out of the city, follow the river Lech along the right bank up river. I the first case we shall walk from a village to the next there ought a beautiful but monotonous country; in the second case we s hall have a route, almost entirely along unpaved roads and footpaths, following a beautiful river, immersed in an intense green vegetation, with glimpses on the river: a scenery of rare beauty for the variation of the current, for the man-made barriers and the presence of a fairly varied fauna, including beavers with their teeth work of scraping plants. Let us bear in mind that once we reach the river we will be far from inhabited areas, we, therefore, need to carry some water and snacks. From the centre we go back to our steps and follow the Oberer Graber, the Am Vogellor, the Forsterstrasse, the Remboldstrasse where this turn left: here the two alternative routes part: one crosses the city park and reaches the river Near the water racing facilities, the other continues along the city streets and reaches sports facilities for football and athletics. Overall, the two paths do not reach significant altitudes: The route that follows the river doesn’t need instructions regarding direction: suffices to follow the Lech up river along the right bank, therefore instructions will only be given for the blue route. Having left the Remboldstrasse, we turn right and take the Haunstetterstrasse; we cross the railway line and carry on straight ahead for over 4 km; Continuing on the right along the Landsbergerstrasse, then the Konigsbrunner Strasse we arrive at Konigsbrunn; without changing direction we advance for a further 6 km, we turn right, we cross the 17, turn right and in 1,7 km we shall be on the A16 and at Kleinaitingen, then a further 3,5 km and we shall be at Graben, where we may call it the day.  Along the alternative route we may find a place to rest for the night in Prittiching.