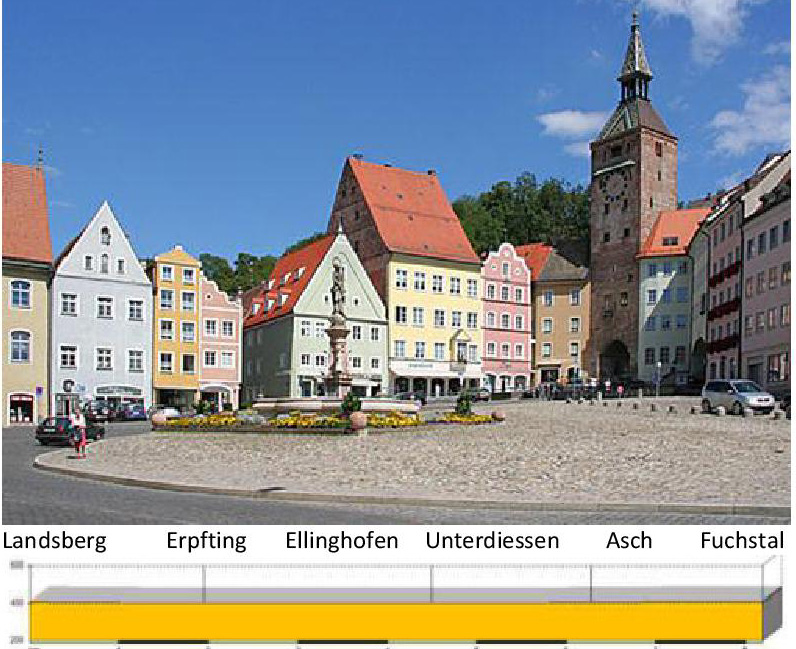 LANDSBERG – Situated on the celebrated Romantichestrasse, a tourist route which connects, in a North to South direction, Wurzburg with Fussen. The medieval town arose on the crossroad between two ancient routes, the Via Claudia Augusta and the Salt Road by the will of Henry the Lion of Saxony. It was founded on the left bank of the river Lech where the historical centre is still recognizable. The development of the town continued until the end of the 19th century, mainly on the opposite bank of the river (where today is the greater part of the modern city, with the quarters of Katharinenvorstadt, Neuerpfting, Weststadt and Schwaighofsiedlung). To enter the historical centre, we pass under the beautiful bayertor, a tower gate of medieval origin. The heart of the city it is undoubtedly the Hauptplatz (the main square) where we find three of the most important monuments, the Rathaus, the Marienbrunnen fountain, the Schmalzturn, and the remains of ancient fortifications going back to the 13th century. The urban structure of the city owes much to its commanding position on the river bank. On the left bank, in fact, a tower rises, which seems fitting for a fairy tale, called Mitterturm, which was built at the end of the 19th century on a design by Hubert von Herkomer.

From Landsberg we have a choice of two possible routes:  1) We may follow the Romantichestrasse and in such case we may start from the Rathaus, returning on our steps, thus following the Ludwig Strasse, then the Vorderer Strasse, we turn left, we cross the River Lech and follow the Augsburger Strasse, we arrive on the Hinderburging, we turn right, then left on the Iglinger Strasse which we follow for about 4 km up to the Landsberger Strasse. We turn left and follow the road across the country: 4 km and we arrive at Erpfting. We enter the small village and at the first crossroad turn left on the Ellighofen Strasse or LL2, which in its turn takes us to Ellighofen. We cross this small village entering on to the Bachfeldstrasse and turning onto the Fuchstalstrasse which we follow for about 2 km on the edge of a fine woodland. We arrive at Unterdiessen which we cross in a North to South direction and turn left on the Fuchstalstrasse by the last houses. 500 m and we turn right on the LL16 which we follow straight on, again across a beautiful country, for 3 km and arrive in Asch, another small village. We come out and take the Freybergstrasse where turning right will take us on the Schulstrasse, then left on the Hauptstrasse, on the right on the Weldener Strasse and we shall be in front of the parish church of Fuchstal.

2) If instead we prefer a naturalistic route, full of panoramic views, on the river Lech, then from the Rathaus we should continue due south and turn left on the Klosterl, then the Wilparkweg and follow the river Lech, here rather low down between two natural high banks. We are now engulfed within a beautiful forest, with clearings and hamlets such as Pitzilng and Mundraching, a few ups and downs but without excess. Distancing ourselves from the river we may reach Reichling, an ancient Roman settlement with an interesting museum, or crossing the Lech we may halt at Epfach, the important site of a Roman camp on the Via Claudia Augusta.