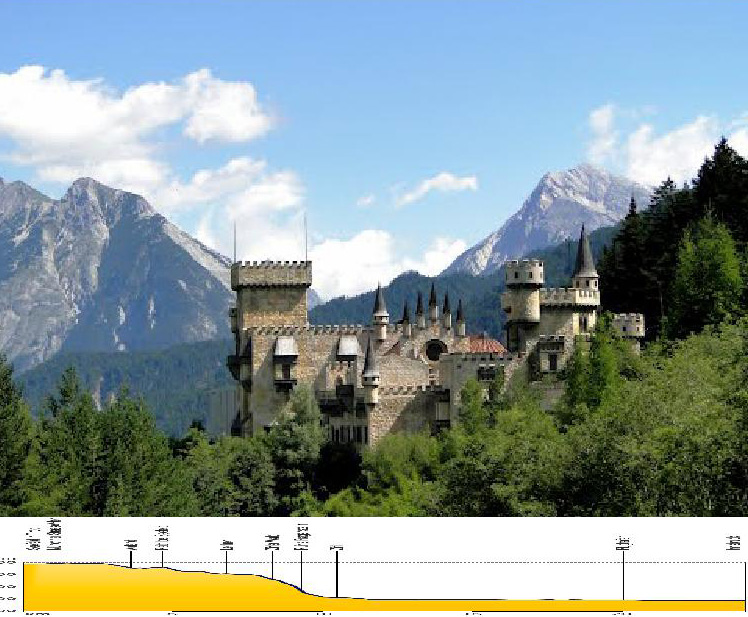 Saturday 9° / 7 ° CSunday 16° / 7 ° CMonday 20° / 11 ° C
Seefeld – The village is located on a plateau north of the Inn River. It’s on the watershed between the Inn and the Isar. The plateau (where Leutasch and Mosern are also located) is bordered by a steep downhill to the south. To the north the valley continues through the towns of Scharnitz and Mittenwald in Germany. Seefeld was mentioned for the first time in 1022 and there was a monastery whose church is the parish church. In 1384 the church of St. Oswald was a place of pilgrimage. The Reith resort is located at the foot of the Reither Spitze (2,374 m) top on the southern edge of the Seefeld plateau. The name of the village, Reith, means in German “defaced place”. The settlements Auland, Gschwand, Krinz, Leithen, Mühlberg and Reith form together the municipality of Reith bei Seefeld, which, as its name already reveals, is located in the Seefeld Olympic region.
We enter Seefeld as we come out of the wood and walking along the Leutascher Strasse (L14), at the crossroad we turn right on the Munchnerstrasse and continue on the lane parallel to the Innsbruckerstrasse (L36) then Auland Gstoag which takes us along the railway; we continue for over 2 km and turn right then sharp le ft on the Bunsteig; we are on a gentle downhill course and for a short distance  we return on the Auland Gstoag; if we don’t need to enter in the locality of Auland, turning right we take the Muhlbergweg which turns into a cycling lane taking us directly to Reith bei Seefeld, after having crossed the 177 and the railway; we arrive on the Romerstrasse. We resume walking along this road, directed to the South East. We are at an altitude of 1127 m, but in 200 m we begin to go downhill rather swiftly until we reach 600 m on the banks of the river Inn. We follow the Romerstrasse for 700 m, to then go left taking the Kalktalweg, then right the Leithener Waldweg which follows the railway within a fine forest for 1,4 km when turning right we get out of the forest. We cross the railway and enter the small locality of Leithen. Once entered this small village, we turn left on the 177 and we follow it for 4 km, up to Girl, paying attention to the traffic and taking the lane on the side every time there is occasion. We have come down to an altitude of over 300 m lower. At the bottom of the decent, along the straight line, we leave the q117 and follow the Buhelstrasse or L57 on the right, which leads directly to the centre of Zirl. Continuing straight on the Morigglgasse, then Schongasse, Bahnhofenstrasse, and arrive on the River Inn; we cross the river, turning left on the Radweg, the cycling lane, which even changing its name, follows the river, first on the right bank, then on the left; 2,6 km, following the motorway on our right, we arrive at the motorway junction, which she cross.  4,6 km still on the cycling lane along the river   and arrive at a second motorway junction: we turn left, pass the river and turn to the right, still on the cycling lane.  3.5 km along the left bank of the Inn and se arrive at Innsbruck. We leave the river and take to the left the Doktor Stumpf Strasse then the Holzhammerstrasse, we continue on the Egger Lienz Strasse and we arrive at the crossroad with the Leopold Strasse: straight to the left on the Sudbahnstrasse the railway station, on the left the centre of Innsbruck.Jochen Heinke