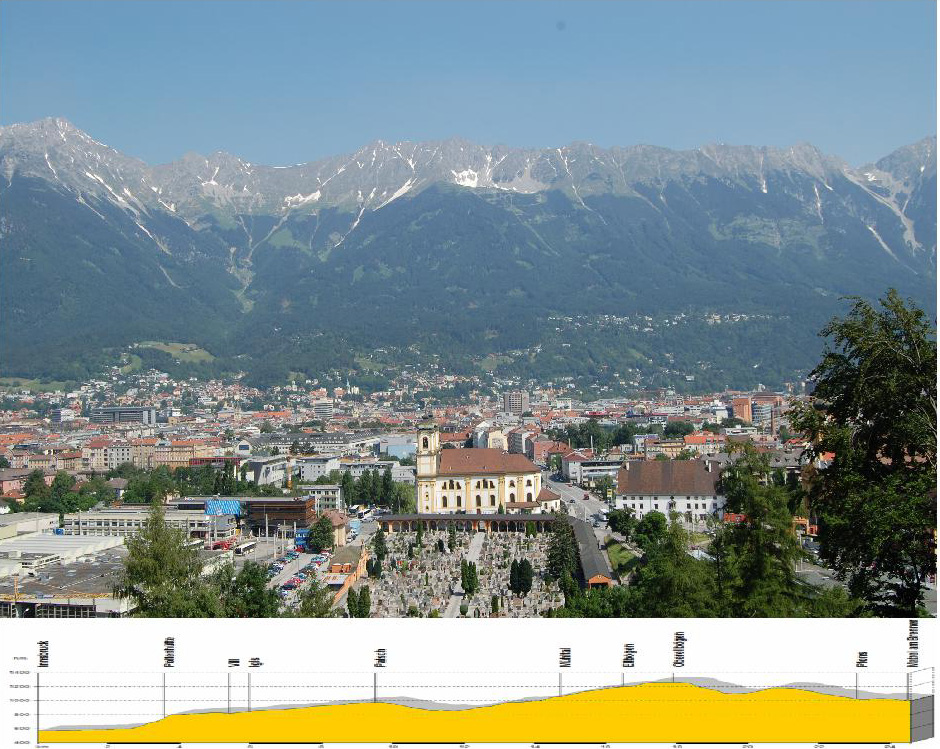 Saturday 31° / 18 ° CSunday 31° / 18 ° CMonday 33° / 19 ° C
Innsbruck (in the dialect of Tirol Innschpruckh) is the capital of Northern Tyrol. Historical city is known by the name of Princely County of Tirol. In archaic Italian it was known as Enoponte o Ponténo (from the Latin Oeniponte), from which the inhabitants were called pontenési. Situated at 574 m above sea level and with 122 458 inhabitants, Innsbruck is the fifth city of Austria in number of inhabitants, (after Vienna, Graz, Linz and Salzburg.) It is crossed by the River Inn; its name derives from Inn and Bruck, or bridge on the Inn.
An engaging stage fir its gradient. Once out of Innsbruck, we walk through some suburbs scattered on the foothills of the valley crossed by the Brenner motorway, which is on the right. The landscape varies from cultivated fields to conifer woodlands.  From the centre of Innsbruck we should take the Sudbahnstrasse at the right of the railway station . We arrive on the Olympiastrasse  that we  follow  at the left for 500m;   we go to right, we follow the river underpassing  Motorway 12 then 13, Motorway of Brenner, we go up then  we cross  Iglerstrasse and we take path n.3 that after long  ascent , we go at Vill. We cross  the centre runniung  the Igler Strasse; we go on the left   and we take the Lilly von Sauter-Wegh, then at right  the Viller Steig and we  arrive  to Igls. At the first crossroad we turn right on the Habichtstrasse and we will be in front of the parish church. We arrive on the Ingler Strasse and turn right, then sharp to the left on the Fernkreuzweg that will take us into open countryside. We continue to go up and from 800 m and reach 1000 m of altitude, We walk across a fine countryside for over 3 km, (footpath n.1), keeping a North-South direction even when, after 700 m, we leave the Fernkreuzweg to arrive at Patsch. We cross the locality and  we take the Burgstall , then the Zollerweg  that we go  to cross  a fine  forst and to arrive to St. Peter and Muhltal. Please, note that we are walking the St James’s route backward, as age road signs will tell us.  A Muhltal we turn right on the L38 for to go  at Innerellbogen ant to continue for Erlach. Arriving at the most distant point in the valley, we turn right, aggirando la montagna and we arrive  to Gedeir, then to Obplons, at last to  Phons. Out of the village we take the Waldfrieden, then the L38 o Altsatadt, which we leave to take the Romerweg on the left to arrive in the centre of Matrei after crossing the railway.Ferdinand Tremi