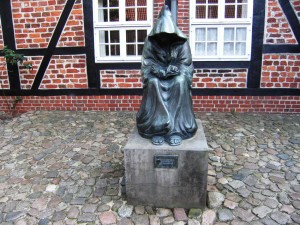 Albert was born around the end of the 12th c. And in 1232 he became Abbot of the Benedictine Monastery of the Holy Virgin Mary of Stade, then an important Hansa port situated in the estuary of the river Elbe, in Germany.
In this monastery, very influential by virtue of its vast possessions. Albdert the Abbot realized the need of imposing a stricter ecclesiastical discipline having in mind the Cistercian rule.
In order to enforce such rule he needed the agreement of Pope Gregory IX in Rome, the centre of Christendom.
The Pope gave his consent to the desired reform, however Albert’s brothers and his superior, the Archbishop of Bremen, refused, being more interested in balance of power with the house of Welfen, rather than in a complex reform of the monastery.
Albert, feeling let down, resigned his position and entered the Minors’ convent of St John of Stade making a Franciscan vow of poverty.
Here we engaged in the writing of some theological works, and the so-called Annales , a Chronicle in Latin of the most important ecclesiastical and political events to his days. A chapter in this work is a fictional dialogue between two monks, Tirri and Firri, regarding the best pilgrimage routes to Rome. In this dialogue, told as a story, as it was customary in the Middle Ages, the abbot suggests various routes with precise information on places and distances to be covered, on the conditions of roads, and the length of the various stages in German miles. The original manuscript is preserved in the Herzog August Library of Wolfenbuttel in Germany. Today, the journey of Abbot Albert is the official route of the Via Roma Germanica. (Monaco Alberto – Short History)

MANUSCRIPT BY ABBOT ALBERT OF STADE

Photographic copy of the manuscript in the Wolfenbuttel Library, in Germany taken for the Via Romea Germanica project – Annales Stadenses – Wolfenbuttel.
Download PDF

The Vatican Gallery of the Geographical Maps is of artistic, geographic and also symbolic significance: The whole series of the maps represented served to envisage a geographical and spiritual unity of Italy. It was commissioned by Pope Gregory XIII and it is the work of various artists: Girolamo Muziano, Cesare Nebbia, the two Flemish brothers Matthijs Bril e Paul Bril, Giovanni Antonio Vanosino of Varese and Antonio Danti, who decorated and painted it in fresco technique between 1580 e il 1585, following the instructions of the Dominican geographer Ignazio Danti, from Perugia. It is interesting to see the different areas of Italy displayed along the route of the Via Romea Germanica , which notwithstanding more than three centuries elapsed , the territory is not very different from that seen by Abbot Albert in 1236. Here is a sample showing Lake Trasimeno.
-See Vtican Museum’s Map-

CASELLI – DOCUMENT ABOUT  VIA ROMEA IN CASENTINO

We present the study of the Via Romea in Casentino, where there is the junction of many ancient roads.
Download PDF

MOUNTAIN COMMUNITY OF FORLI’ AND CESENA COUNTRIES – VIA DEI ROMEI

Report on the Pilgrim Ways of the Forlì-Cesena Province, written by Caterina Mambrini, Giuliano Marcuccini, William Rossi Vannini in 1995 on the occasion of the 2000 Jubilee
1995-ViaDeiRomei
Download PDF (25MB)

Archaeological Report of the research carried out on the Serra Pass, of 1999 (by Luca Fedeli).
Download PDF

THE WAYS TO ROME

The expansion of Rome occurred along existing routes connecting with the territories of enemy populations, and the stage of Roman expansion in Italy indicate also the chronology of the expansion and growth of the road system.
Download PDF   Download of the Roma Road System

The Appian Way was built in the context of such expansion, as a military road which enables to make easier and faster communications with the southern borders of the conquered territories. The road was later extended as more territories fell under the rule of Rome.
Download PDF

The Via Aemilia retraces a pedemontana trail joining a string of settlements, in a phase of urbanization by the terminals of secondary ridgeways of the Apennines on the Adriatic side. The Emilia-Romagna offers a structure of ridgeways like a comb. From the main watershed ridges descend parallel with the secondary ridges to the plain where agricultural settlements exploiting the fertile alluvial land, communicate with one another by the main ridge of the Apennines.
Download PDF

This was the third great route of Roman expansion, in a chronological order, and was the first of the two main roads to the north in order of importance; having crossed Umbria and the Marches it reached the Adriatic coast at Fanum until Senigallia.
Download PDF

Le The Alps consist of a fold of the Earth crust in the shape of an arch, stretching from the Colle di Cadibona, on the Ligurian sea and run westward with a curve it turns north and to the east to join the Carpathians and the Dinaric Alps towards the eastern European plains and the Balkans. This great fold is characterized by a series of transverse valleys crowned with rocky peaks of great elevation . Communications between the Italian Peninsula to Europe , in whatever direction must negotiate such rocky crests.
Download PDF

Giovanni Caselli, a landscape anthropologist and a walker, has long been working on “Historical routes” which from the Middle Ages crossed Italy and Europe , and which have been the means of cultural and trade transmission for centuries, influencing the culture and religion of all peoples. Giovanni Caselli is a founding member of our Association Via Romea Germanica; He was the first to speak of a rediscovery of the Via Francigena . This photograph shows Giovanni walking with Prince Charles in the Val d’Orcia in 1986, while he explains the importance of the ancient rtoa d from England ; the Prince sent him a letter of appreciation.
Download Jpg

Prof. Giovanni Caselli presents one of his studies about the Casentino, the territory that from the Crest of the Appennines of Romagna stretches over the Tuscan mountains and hills to Arezzo

In this part of the book “La Linea e La Rete” published by the Italian Touring Club and by the Regione Emilia Romagna, the authors describe the historical road system within Emilia-Romagna and in particular, referring to the “Annales Stadenses”, of the Via Romea Germanica, including the characteristics of the Bidente River Valley.
Download PDF

In this work the Author summarizes the historical research in Casentino, indicating the events, the viability, the localities, etc…. joined to the passages of pilgrims and walkers. It is useful to understand the Via Romea Germanica and its history in this part of Tuscany.
Download PDF

OSIRIDE GUERRINI – (Ravenna) – A TRAVEL ALONG THE CENTURIES ON THE VIA ROMEA : THE HISTORY OF A COAST ROAD

Ravenna has been of paramount importance for pilgrimages and for sea and land connections: not only for its History, but also for the continuous environmental and geo-morphological changes, linked to the subsidence, the displacement of the Adriatic coast, the variations of the course of rivers and wetlands, the reclamations, the birth of real “islands”. In this report, the Authoress describes with precision and great detail the communications of Ravenna from the Roman Empire to the last centuries.
Download PDF

Giovanni Caselli published a comprehensive book on all the Roman Roads of Italy in a book now out of print. You can download the complete PDF of the book here :
https://www.academia.edu/4476396/PARTE_SECONDA_-_LE_STRADE_DI_ROMA_IN_ITALIA