IN SIBIU (ROMANIA) FOR EUROPEAN RECOGNITION

Dear friends of the Via Romea,

in recent days I participated in the Council of Europe Forum in Sibiu, Romania, representing the Via Romea. I spent two days working very hard, but it also was very interesting. Our friends from Jerusalem Way, Thomas and Markus were also present in Sibiu. As you know, participating in these events (the Training Academy in the spring and the Forums in the fall) is important for maintaining contact with the other Cultural Routes, and especially with the Luxembourg Institute authority.

For us, this year, it was even more important, as we have just filed our European certification application. In fact, many of the Forum’s speakers are also independent inspectors who will come to check our information.

In Sibiu we were able to see which are the other Paths that asked the same certification: some who wanted to present it, did not make it in time, or could not complete the dossier (such as the Via Romea Strata or the Way of Francesco-Francesco’s Way).

In the end, the applications presented are apparently 8, and only 4 or 5 will be approved. As I said on the phone to President Foietta, I am optimistic because I have seen that the other Ways that have applied for certification also have problems like us in some parts. After all, the decision will be made by the Council, and therefore ultimately a political decision rather than a technical one. 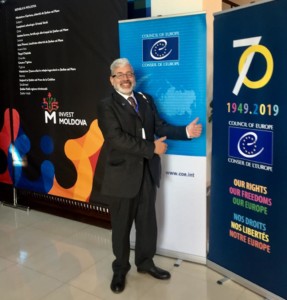 The first day of work was based on interesting lessons on European cultural policies, on the planning of cultural development policies in the territories, and on tourism products linked to European cultural routes. As always, we have been suggested to collaborate as much as possible with the other already certified Routes, or aspiring to be Cultural Routes. Great importance has been given to the theme of the “narration” of the Paths. Knowing how to tell the experience of the Way to an increasingly demanding and hurried public. But we must realize that today almost 90 percent of the information on which the tourist decision is based, pass by the smartphone. And so we need to develop skills and abilities in the field of social media, but also of internet graphics and analytical tools (Analytics, and big data).

On the second day of work, we were shown many experiences of Cammini, with the awarding of the newly certified routes (Iron Curtain Trail, European Industrial Heritage Route, Liberation Route, Route Le Corbusier, Route of Reformation). There was also space for me to briefly present the Via Romea Germanica with slides.

The next events: the new Training Academy will be in June 2020 in Fontainebleu in France; the next Forum will be in October 2020 in Chania, Crete, Greece. Both would be worth to participate because the names of the new certified routes will be announced in the first one; in the second there will be the ceremony of delivery of the Certifications. And we hope to be among them!

ciao, thank you all,