TRANSPORT OF THE SALT FROM SOLTAU TO QUENDLINBURG

The delightful initiative of the friends of Cervia, to bring the fruit of their Saline to the Pope along the Via Romea, finds a “twin” event in Germany, where the HISTORISCHER SALZTRANPORT is presented again. (see: http://www.historischer-salztransport.de/).
“From 22 May 2018 to 5 June 2018 the association of Soltau salaries organizes a transport of salt from Soltau to Quedlinburg with a historic cart pulled by two oxen, the animals are called Oskar (900 kg) and Paul (950 kg), They are twins and belong to an old race in danger of extinction, which will be led by owner Jürgen Schlüter of Sonnewalde. It seems that in 936 King Otto I donated the “Curtis Salta” (Corte della Salina), later to become Soltau, at the convent of Quedlinburg.  The salt was probably transported with two-wheeled carts pulled by oxen and served to preserve the skins with which the parchment was made. This year’s transport wants to remember this tradition to celebrate the tenth anniversary of the association.  The way followed was known since the Bronze Age and is now being restored as a pilgrimage route with the name “Via Romea.” Those interested can participate in the whole itinerary or even in single stages. More detailed information is provided by the Soltau Salt Museum. ” The site includes: stages, dates, distance and duration. Including registration for those wishing to participate.
On June 3, participation in the medieval market of Osterwieck is scheduled. 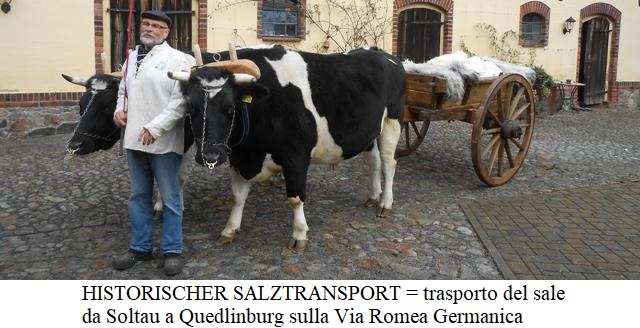